Warforged Paladin of Gond – God of invention and labor

Once an heir to a noble family in Athkatla to the south, Pelagornis’ family had gained power and influence swiftly. In doing so, they became rivals to House Bormul. The competition began as an economic cold war and eventually snowballed into a blood-feud that soon saw Pelagornis on the run for his life.

Taking pity on the bold exile, Duke Abdel Adrian took Pelagornis on as castellan of his keep east of Athkatla. But he underestimated the tenacity of the Bormuls – assassins stormed the keep and smote the young paladin with a soul trap spell. Fortunately, Pelagornis’ sound defensive strategy meant the attackers could not hold their ground and were themselves slain.

The crystal skull containing Pelagornis’ trapped soul sat within the keep for nearly a century, even surviving the ravages of the spell plague. Eventually, Abdel found the skull. Shortly thereafter he had the notion to restore the paladin to life by plugging his soul into one of the experimental golems being crafted by the priests of Gond. With considerable assistance from the High Priest, Duke Torlin Silvershield, the procedure worked, and Pelagornis was revived with an ironclad body built for war.

He began a new life as a bounty hunter, dolling out justice to the unjust and keeping on eye on the branch of House Bormul that had carved out a place among the noble Patriars of the upper city. 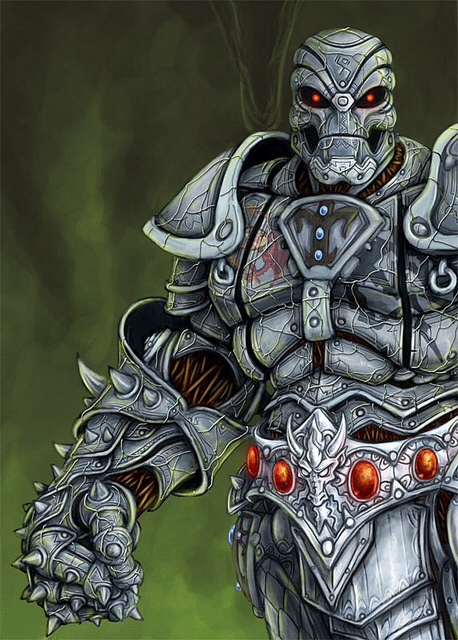